We’ve written about Keosz before and, no doubt, we will do again because he consistently delivers powerful and emotive electronic music, which is right up our street. The Slovak producer’s latest tune, Desire, caught my attention this afternoon, perhaps as it perfectly suits the mood I’m in! It has neither a beat nor an obvious structure and yet it is awesome. Beautiful melodies and ominous bass (might need to trademark that) combine with unworldly sound textures. I love it!

Marino69 (also known as Abyssus) is a producer from Slovakia who started creating music in 2000 and, thankfully for us, “never stopped”. His beats would probably land somewhere in the dubstep spectrum if you threw them up in the air and let them scatter, but that’s where any simple labelling should stop. Each of his tunes carries a sense of drama, as if the hero of the film has got his shit together at last and is pursuing the bad guys. Effortlessly marrying power and melody, Marino69 makes music that would be equally effective in a dark club basement or blasting out of your speakers in the garden on a hot summer’s day. Here are a couple of my favourites, but everything I’ve heard so far is extremely impressive.

Lovely little garage beat here by Honey T. There is a deep bass, lazy beat and some gorgeous vocals all mixed together in this sparse mix. This is the sort of song I would expect to hear at the end of a blazing hot summer, sitting on the beach reflecting on what might have been. However the sound produced here is top notch (like all things Honey T seems to touch). You can listen and purchase it here – 1 of 2 songs released on this Summer Piss EP under Sun side records. Very glad I found this. 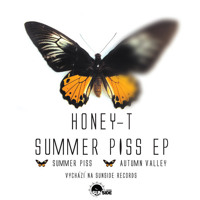